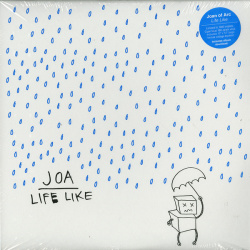 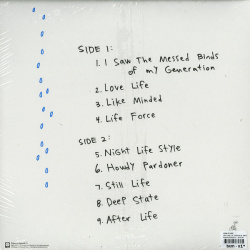 Life Like is Joan of Arc distilled down to/embracing its rock essence. Gone from the band’s music (for now) are the electronics and layers upon layers of tracks. Gone from their liner notes are an extensive list of musicians and instruments. Instead, Life Like is the result of four men adhering to Thoreau’s famous principle, “Simplify, simplify, simplify!
But, when it comes to Joan of Arc, even “simple” isn’t an entirely straightforward concept. Judging only by the record’s impeccable guitar-bass-drum interplay, it might be hard to imagine that Life Like was entirely conceived with one less member than Joan of Arc ultimately entered the studio with. After recording October’s two-song Meaningful Work 7″ as a trio, frontman Tim Kinsella, drummer Theo Katsaounis, and bassist Bobby Burg (Love of Everything, Vacations, Chin Up Chin Up) welcomed guitarist Victor Villarreal (Owls, Cap’n Jazz, Ghosts and Vodka) into the fold shortly before leaving on a month-and-a-half long tour of the U.S. and Europe. Villarreal and Kinsella re-connected during Cap’n Jazz’s reunion tour, marking Life Like as the first collaboration between them since the 2001 self-titled Owls album.
[info from polyvinyl records]